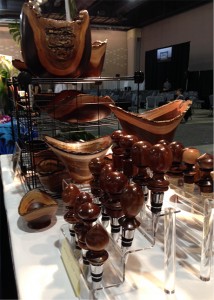 The Creative Industries Division supported an inaugural Hawaii presence at the American Made Show in Philadelphia, which took place from January 18-21, 2014.  The Hawaii Pavilion featured ten visual artists in categories ranging from woodwork and jewelry to wearable fiber and mixed media.  The American Made Show brings together the US’s top artisans with retailers representing the nation’s top craft galleries, museum stores, retailers and catalogue houses.  The Show is unique in that all works on display are exclusively designed and studio made by artists in the United States, with no imports or mass manufactured products allowed.

Among the Hawaii artists featured and in attendance at the Hawaii Pavilion is wood turner Aaron Hammer from Hauula, who exhibited his unique natural and straight edge wood bowls and bottle stoppers.  His bowls are created using a technique that is best demonstrated in a real time video: 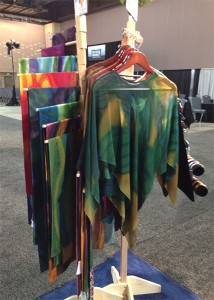 Also exhibiting at the Hawaii Pavilion was artist Patti Pease Johnson from the Big Island, whose vivid silk fashion line featuring large plant shapes and colors that simulate the rainforest, were featured in the American Made Show’s fashion show.  Pease Johnson’s work is created in the mediums of liquid dye on silk with wax resist or soft pastels.  For silk pieces, all colors are mixed using the four printing process colors: cyan, magenta, yellow and black.
Both artists have long captured the attention of many prominent galleries and retailers in Hawaii, and their craftsmanship and work continue to garner national attention and recognition beyond our State at the American Made Show.