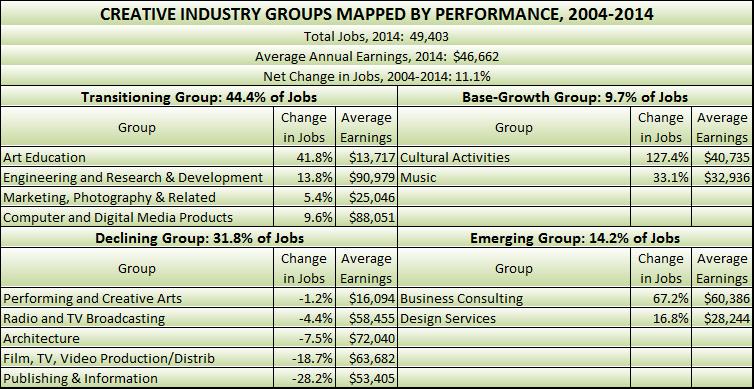 Overall, the creative industry groups added about 4,925 jobs to the state’s economy between 2004 and 2014. This amounted to a 11.1 percent increase in jobs, lower than the 11.5 percent growth in Hawaii’s civilian economy as a whole for the period. The leading performers of the overall portfolio were the cultural activities and business consulting groups. The 2014 earnings average of the creative industry portfolio of $46,662 was lower than the statewide average of $51,875.

Only two creative industry group, cultural activities and music, registered as high performing base-growth industries for the 2004 to 2014 period.

The industry groups in the emerging category were composed of business consulting and design services. This group also performed well in job creation.

Four of the creative sector industry groups fell into the transitioning category for the 2004 to 2014 period. These ranged from the marketing, photography & related which increased 5.4% in jobs to arts education, which grew jobs by 41.8%. However, while these industry groups grew, it was not as vigorous as the same industries nationally. As a result, they lost some ground to the nation in terms of competitive industry share.

Finally, five creative industry groups that lost jobs in the 2004 to 2014 period fell into the declining quadrant of the performance map. Radio & TV broadcasting, publishing & information, film, TV, video production/distribution, performing and creative arts, and architecture all lost jobs for the period. It is important to note that the independence of these creative groups is not yet clear. The performance of some groups may reflect strong or weak markets driving other industries for which the creative target is simply a supplier. For instance the high performance of cultural activities in the performance map probably reflects the strong tourism demand over the period, rather than a specific local or export market for cultural products. Likewise, some targets may perform poorly because they are tied to another industry that has experienced difficulties.

As discussed earlier, a number of creative activities cannot be easily or meaningfully defined in the NAICS industry system. These activities — mainly the digital media and broader film industry — represent either markets, or a series of partial NAICS industries. In Section V, the available information for these hard-to-measure activities will be presented to the extent available. However, most of the employment engaged in these market activities is probably captured in one or more of the producing industries that we are able to define and measure. The goal will be to eventually parse the producing industry employment into the important market sectors they support.