Arts Advocacy is a sector of Hawai`i’s creative economy that supports the work of artists, arts organizations, and others in the creative industries. Advocacy is the collective term for work done to promote, protect, and preserve an organization or cause. It’s about sharing one’s views and opinions with people that make decisions impacting organizations in the creative industries. Those decision makers include, but are not limited to, elected officials, bureaucrats, commissions and boards, etc. Effective advocacy hinges on continuous education and communication between supporters and the public. Educating both the public and decision makers on the true impact of the arts must be a primary goal for any arts advocate. The arts have major impacts on the economy (specifically through tourism and economic development), on education, and other areas of our society as well. 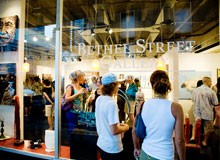 Two of the key advocates are the Hawai`i Arts Alliance and the Hawai`i State Foundation on Culture and the Arts. The Hawai`i Arts Alliance, founded in 1980, is the only umbrella nonprofit organization that promotes all the arts statewide. Through working with its ARTS FIRST partners, it’s developed some exciting arts programs to help cultivate essential qualities students will need to succeed in the 21st century. It’s also a member of the national Kennedy Center Alliance for Arts Education Network. 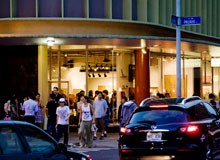 One of its main community projects is The ARTS at Marks Garage. It’s a creative incubator for artists and small arts groups, to nurture their creative work. The collaborative gallery, performance and office space, aims to transform downtown Honolulu through the power of the arts. The ARTS at Marks Garage is at the center of an urban revitalization movement in the Downtown/Chinatown area and the Hawai`i Capital Cultural District.

By purchasing an ARTS License Plate through the Hawai`i Arts Alliance, you can help support several Arts Excellence Awards for outstanding school arts programs which are presented annually at the Celebrate the ARTS! benefit and concert held at the historic Hawai`i Theatre. That’s when the Hawai`i Arts Alliance also honors an individual for a lifetime commitment to the arts and arts education in the Islands with the Alfred Preis Award, named after the architect of the Arizona Memorial, who started the Hawai`i State Foundation on Culture and the Arts.

The State Foundation on Culture and the Arts, established in 1965, is the state’s official arts agency. One of its programs, Art in Public Places, created in 1967 with the enactment of the Art in State Buildings Law, designates one percent of the construction costs of new public state buildings for the purpose of purchasing or commissioning artwork. Hawai`i became the first state in the nation to do this.

The foundation also recognizes the artistic excellence of individual artists for their contributions in the arts by presenting several awards every two years. It also administers the Biennium Grants Program, which supports many arts organizations statewide.

For more information about funding support for culture and the arts, there are several community resources including: The Atherton Family Foundation The Cooke Foundation Fred Baldwin Memorial Foundation (Maui County only), The Hawai`i Community Foundation, and the Hawai`i Council for the Humanities